After a nice summer break, enjoying the Lifestyle of Bern and Swimming in the river Aare (Here is a sample Picture of what happens here during summer http://v2.suedostschweiz.ch/var/upload/news/image/151730_640.jpg), I would like to write a small blog post about the superseding Feature in System Center 2012 Configuration Manager.

When you are deploying Software, a most common requirement is to bring new Versions of Software to a Computer System. In earlier Versions, you have had to run the uninstallation of the previous Version before the Installation program was running. Now with SCCM 2012 you can define per Deployment type inside an Application, which Software should be uninstalled. I will give you an example:

First, I created a new Application for the recently released Version 2.23 of the Software KeePass:

As you can see, I only have the MSI Installation deployment type. In the Supersedence tab, you can then create the superseding rule, click on Add:

The supersedence tab of the Applicatin should now look like this: 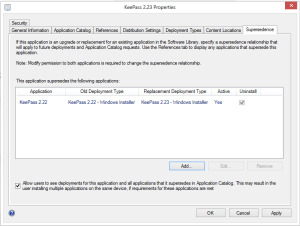 And now, you can add more Applications to uninstall, when Keepass 2.23 should be installed, just click on Add, and repeat the following step. Then you could end up with this, I am uninstalling Opera, when Keepass is installed (not saying that all the Features of Opera are included in Keepass 😉 ) : 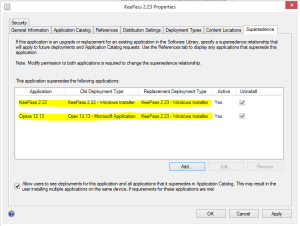 Still having a nice summer 🙂
Martin

This site uses Akismet to reduce spam. Learn how your comment data is processed.